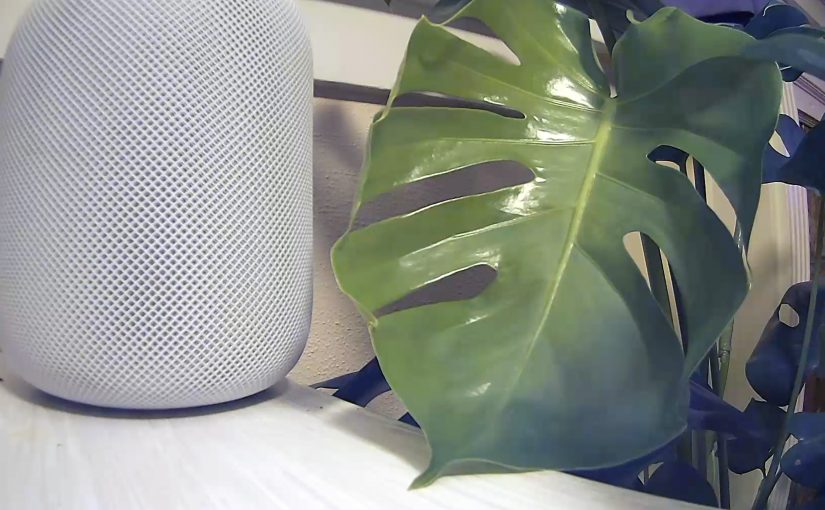 One of my favorite houseplants is my is a Monstera I picked up from Portland Nursery last year. I normally give the plant a bunch of artificial light to help it out. Every now and then a big new leaf grows, and this time I captured the last five days of its unfolding in a time lapse video

The music for this video comes from Kora’s sunrise set at Maxa Xaman, Burning Man 2018.

To make this HD time lapse, I recorded the video on a Wyze cam, which I physically removed the internal hardware microphone from. This cheap cam has a handy auto night mode which shows how much leaf development is happening at night.

I chose not to use wyzecam’s own timelapse behavior because I wanted to build it from the raw HD video myself and get the best time compression possible.

The data was stored on a 32GB microSDHC UHS-I memory card. I read the card using this handy pink card reader.

Wyzecam stores many mp4 files per hour in individual folders per day. I used MP4tools to perform the joins which took the most time. Some of the mp4 files created by the wyzecam were corrupted. I didn’t bother to try to repair them, but this resulted in some of the jumpiness at times as they were not compiled in to the day-long clips.

Finally, I dropped each compiled day of leaf growth (~8GB each) into iMovie and added some tunes. I used the simple timeline editor to drop the length of each day. Not a precise operation but handled it quickly. The timeline looks like this

If I were to improve on this timelapse creation process, I would: